Was the 1961 Single Convention on Narcotic Drugs an Epic Fail? Apparently so 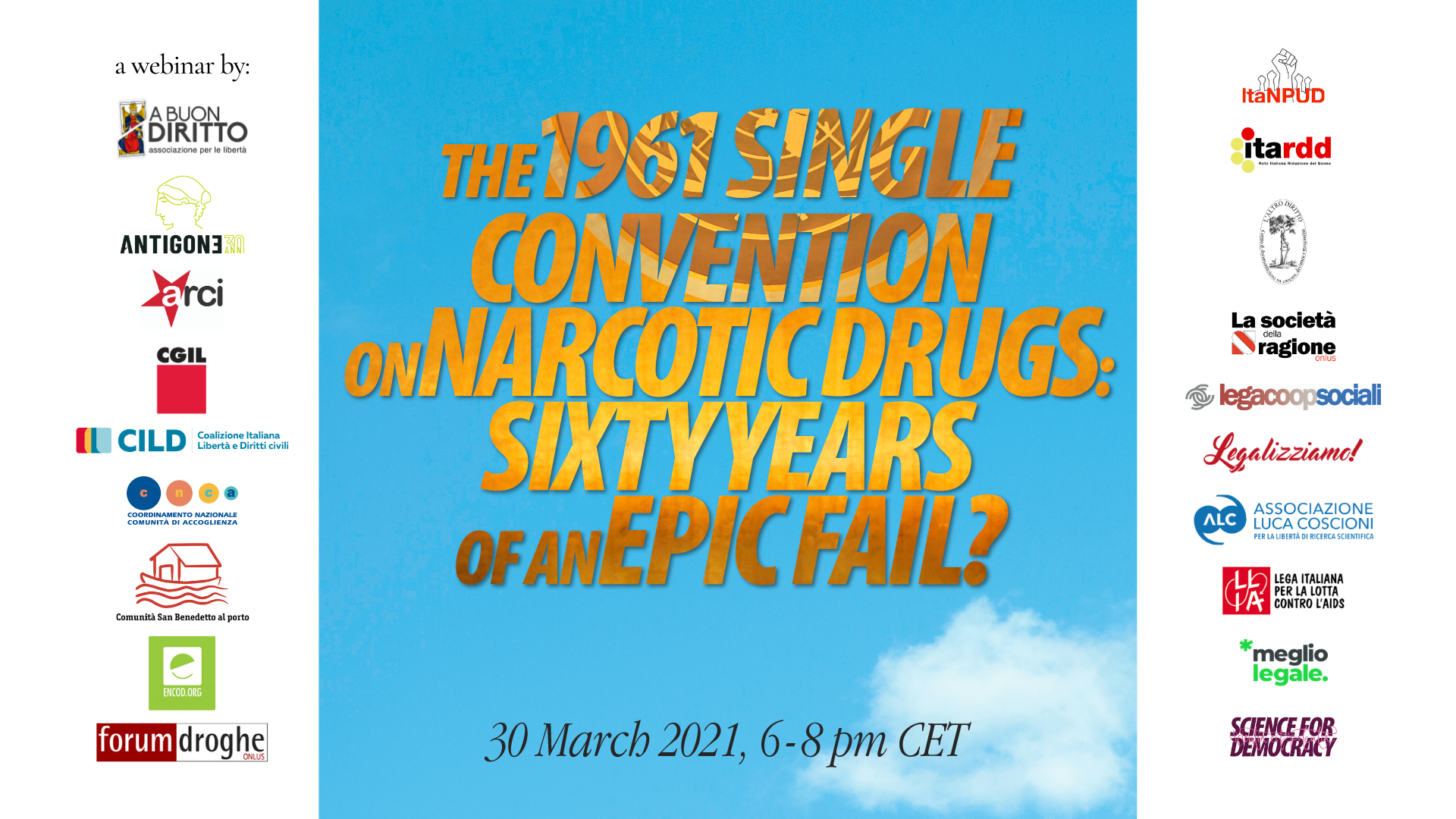 On the 30th of March, to mark the adoption of the UN Single Convention on Narcotic Drugs, Science for Democracy, together with a coalition of Italian NGOs, organized a webinar with international experts to assess the last 60 years of the international drug control system.

Despite the continued relaunch of the war on drugs, States have been unable to reduce or contain the presence of psychoactive substances all over the world. The Single Convention, amended in 1972 and the other Conventions adopted in 1971 and 1988, have virtually had no effect on the world drug market-creating widespread and systematic human right violations at the trans-national level.

Here what was discussed:

After to Special Sessions of the UN General Assembly in 1998 and 2016 entirely dedicated do drugs, in 2019 Governments themselves, meeting at the United Nations in Vienna admitted that:

“Both the range of drugs and drugs markets are expanding and diversifying; the abuse, illicit cultivation and production and manufacture of narcotic drugs and psychotropic substances, as well as the illicit trafficking in those substances and in precursors, have reached record levels, illicit demand for and the domestic diversion of precursor chemicals are on the rise. Increasing links between drug trafficking, corruption and other forms of organized crime, including trafficking in persons, trafficking in firearms, cybercrime and money-laundering and, in some cases, terrorism, including money-laundering in connection with the financing of terrorism, are observed all over. The value of confiscated proceeds of crime related to money-laundering arising from drug trafficking at the global level remains low; the availability of internationally controlled substances for medical and scientific purposes, including for the relief of pain and palliative care, remains low to non-existent in many parts of the world. Drug treatment and health services continue to fall short of meeting needs and deaths related to drug use have increased; the rate of transmission of HIV, the hepatitis C virus and other blood-borne diseases associated with drug use, including injecting drug use in some countries, remains high. The adverse health consequences of and risks associated with new psychoactive substances have reached alarming levels; synthetic opioids and the non-medical use of prescription drugs pose increasing risks to public health and safety, as well as scientific, legal and regulatory challenges, including with regard to the scheduling of substances. The criminal misuse of information and communications technologies for illicit drug-related activities is increasing; the geographical coverage and availability of reliable data on the various aspects of the world drug problem requires improvement”.

We have witnessed decades of a war on people, even bigger than the one on substances, a violent war that has caused tragedy, such as recently in the Philippines. This epic fail is also the very cause of health, social, environmental and economic problems all over the world due to the implementation of repressive drug policies derived from the UN Conventions.

The cradle of the war on drugs is opening up, if not leading the way, to the legal regulation of some substances, the consensus at the UN is no longer there, and the vote on cannabis on 2 December 2020 is a testimony to that.

it is therefore necessary to further motivate and mobilize civil society to urge governments around the world to face the facts and the evidence and demand new drug policies that put human rights and people first.