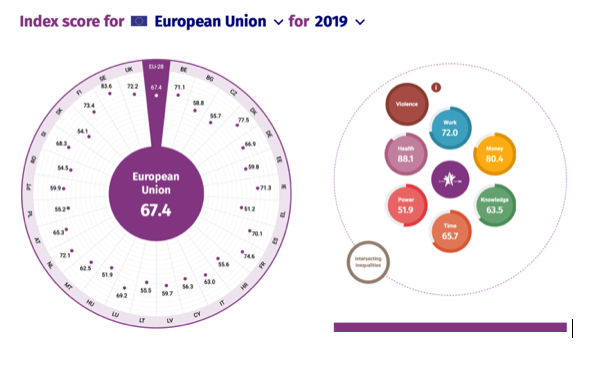 To achieve this, EIGE provides expertise and technical support on a diverse range of gender-related topics.

Among its different policy-making tools, the EIGE’s Gender Equality Index has the purpose to give yearly to the EU and the Member States a score from 1 to 100 (a score of 100 for the achievement of full equality between women and men). This method seeks to be the most direct way to visualize the progress of gender equality in the EU over time, giving visibility to areas that need improvement and supporting policy makers to design more effective gender equality measures, and to eventually understand what’s holding Europe back from gender equality and what’s driving it forward.

The score is produced by the assessment of the gaps between women and men and the levels of achievement in six core domains: work, money, knowledge, time, power and health. Two additional domains may be included in the Index: violence against women and intersecting inequalities.

In 2019, EIGE’s Gender Equality Index reported a score of 67.4 out of 100, highlighting only 5.4 points of increasing since 2005 and showing how advances in gender equality were still moving at a snail’s pace, even though heading in the right direction. While in the domains of health (88.1 points) and money (80.4 points) gender equality was closer, inequalities were still terribly high in the domain of power (51.9 points) which was, anyway, the most improved since 2005 (+ 13 points). Moreover, developments were uneven between Member States, with Sweden leading at 83.6 points compared to the 51.2 and 51.9 scores of Greece and Hungary respectively, with Italy improving the most (+ 13.8 points) and Lithuania without any progress in gender equality since 2005 (Ref: https://eige.europa.eu/gender-equality-index/2019 ).

Next 29th October 2020 the EIGE will give its annual update on the state of gender equality in the EUin an online event that can be watched on the official website or follow along on Facebook.

As organizers have publicly claimed “this year the Gender Equality Index takes a special look at digitalisation in the world of work, and the consequences for gender equality, […] highlight(ing) how digitalisation and the Covid-19 pandemic have affected women and men in their working lives” and “the Index will also explore the effects of digitalisation for some groups that may face additional disadvantages, such as women with disabilities or women from migrant and ethnic backgrounds, when data is available”. Two parallel, moderated break-out sessions have been established to cover these aspects: Platform work: helping or hindering gender equality? and Digitalisation: consequences for gender equality.

Save the date. Because at 10.20 am next 29th October 2020, the EIGE will reveal the new scores for gender equality in the EU. To open the dance next to Carlien Scheele (Director EIGE) and Dimitrios Papadimoulis (Vice-President, European Parliament), at the Opening Address will be present Ursula von der Leyen (President, European Commission), who presented the 2020-2025 Gender Equality Strategy last March.
We cannot wait but see how much of that room of improvement left by last year we managed to fill during this strenuous pandemic year.