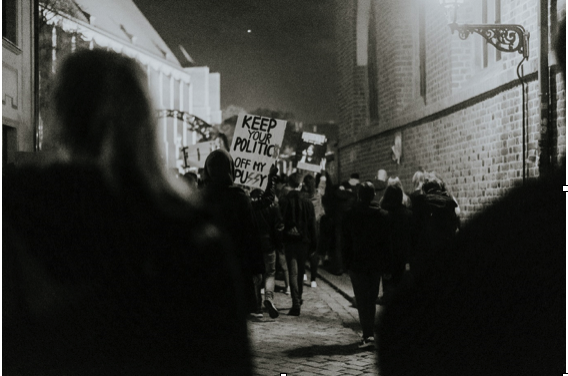 Women rights face yet another hard push back in democratic Europe. The 22 nd of October, the constitutional court in Poland ruled against the right of abortion in case of severe foetal abnormalities.

Abortion law in Poland was already one of the strictest in Europe, but as today it leaves this possibility only to a minimum portion (about 3%) of the already limited 2000 cases a year of legal abortions. Over the last years, women rights activists and pro-choice groups have already registered
dozens (if not hundreds) of thousands of women going abroad for abortion, where local laws provide more freedom. With this new ruling, Poland is on the verge of a humanitarian crisis that needs to be identified as such.

Since the ruling, hundreds of thousands of people have flocked to the streets of Polish cities, with a major manifestation in Warsaw. Meanwhile, the far-right government calls for the protection of Catholic churches against protesters, implicitly giving the go-ahead to extremist groups and
fomenting fears and uncertainties of a conservative society. In hospitals, doctors and health professionals started rejecting women in need of abortion even before the new ruling became effective.

How did we get here, again?

I cannot avoid thinking about Poland as a symbol of the unspoken decline of a fight for civil rights that was interrupted prematurely. The positive push for change in the direction of equity in a more open and fair society, although recently associated with catchy slogans and hashtags, has lost its unapologetic requests and started celebrating victory when the result was in fact only a first step towards the goal. The case of Poland is nor isolated neither rare. It combines something already seen in countries like Italy, where doctors refuse abortion for ‘personal moral objection’ even when
abortion is allowed from law, and women are shamed and left suffering without medical assistance after the procedure in hospitals, and America, where the perspective of a Supreme Court that will affect the life of generations of American women to come. The pattern is always the same: an old disturbing combination of claimed-to-be religious morality, personal interests, blind race for votes.

What lays underneath has little to do with women, and even less to do with morality; it has in fact all to do with power. Women’s body is the catalysing battlefield of power. Who owns the choice over women’s body, owns their reproductive rights, their choice, finally society itself.

Those have little to do with the reason why they are used by politicians and
extremists. We shall not engage in a conversation about uncontradictable beliefs and move it on what it really is: a fight for power. So, why is this happening, again? Because governments can. They make it happen, and they will. In most democratic countries, more liberal abortions laws had come at a high price, and each step of the way was associated with fights, personal risks, physical and psychological pain. Despite this, western democracies have been keen to prioritise compromises over women’s rights, and to trade full support to abortion in exchange of political power and short-term rewards.

It is time for abortion rights to become internationally promoted and defended as human rights. The right of women to choose on their own bodies is not a battlefield where we can leave space to compromise or to restrictive laws. As Poland shows, those are just a step towards annihilation.

The only possible discussion about abortion should be based on science, and on women’s physical and mental health. Although we probably miss the energy of the civil rights movement, we have a new ally in this fight, and we have to call for its help: science. Science can demystify the preconceptions and false information that a certain part of politics has been sharing for years and can help improve the safety and quality of care for women who choose to get an abortion.

Unfortunately, research in the field needs to be implemented and it is not doing as much as it should. In this context, it is particularly horrifying having to recognise the responsibility of scientists
and doctors in limiting women’s rights (as it is happening in countries like Poland and Italy). No system of beliefs should be allowed to justify personal choices of professionals who can ruin women’s life forever. On one hand, the scientific community should be outspoken and push for the universal access of women to safe and legal abortion, trying to improve procedures and scientific evidence to support women’s choice with the best tools science can offer. On the other, health care professionals have the duty to provide the best care to their patients, and to respect their choices. If
their personal system of beliefs goes against this practice, they are in luck: there are many other medical specialities that do not involve women’s reproduction.

Poland is not alone in its mistakes, but women of Poland are not alone either. It is time for the scientific community and society as a whole (men and women alike) to stand together and finally have a discussion they have been avoiding for far too long. The discussion on women’s rights as human rights. Unapologetically and without compromises.

It is time to give full power over their own bodies back to women. Science is the tool we missed before, and we must be ready to use it.